skip to main | skip to sidebar

Good enough to eat, Italian films for the true gourmet! 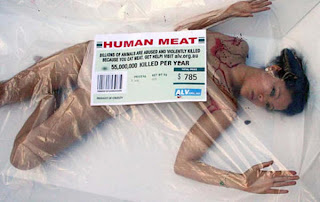 One of the many tasteless subjects I found fascinating as a child in the eighties was cannibalism. I can remember very vividly tales of cannibalism in books by Edgar Rice Burroughs or Robert Louis Stevenson, or recounted by the adults around me. When I was probably 10 years old I remember reading about a pirate somewhere in Malaysia who had a penchant for eating his victims ears after roasting them over an open fire. Don't know if it was something he actually did, or just image branding. Regardless, I was enthralled. And it seems I was not the only one.

From the mid seventies to the late eighties Italy was a cinematic super power, atleast if you enjoy slightly offensive dehumanizing exploitation films with hardly any logic consistency scriptwise, and even more films that objectify women. And I do. I certainly do. In fact, I love it! Italians produced a wide range of exploitation films, starting with the so called mono genre, and developing into nunsploitation, nazisploitation, sexploitation, slasher films, giallo, zombie films and the subject for today's blog: cannibal films. 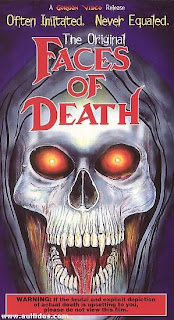 The genre grew out of the aforementioned mondo genre, which also originated in Italy before becoming international. Mondo is italian for world, and the mondo films were a sort of low brow sensationalist anthropological exploitation cinema - in the borderland between fiction and documentary. The films showcased a variety of perceived primitive practises from around the world, with a fair dosage of schock value. Shockumentary was another term used for these films. The genre devolved into death fetishism with the american Faces of Death and died out soon thereafter. Not really a great loss.

The Cannibal films can be seen as a direct off shot of this genre, both stylistically and with regards to the subject matter. Cannibal films transported the viewer to remote locations and let them witness a wide range of primitive (mostly fictional) customs - including cannibalism. The films also cashed in on the death fetishism of the mondo genre by including footage of animal death. Either stock footage of animals eating each other, or filmed sequences of natives slaughtering animals for food. These scenes are usually the most repulsive, especially considering that I'm personally a vegetarian. In addition these scenes usually had little to do with the "natural" behaviour of the supposed tribes who performed them. But they are what they are, and thankfully the climate for portraying animal cruelty in film has changed considerably since then. Let's not forget vicious treatment of animals was common in main stream films just 40 years ago. 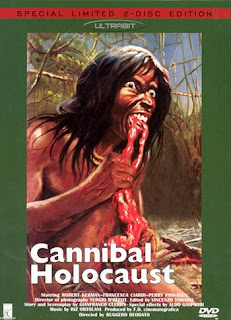 An even more notorious example of linking to the mondo genre can be found in the most famous of all the cannibal films, IE Cannibal Holocaust (1980) by Ruggero Deodati. This film is about a mondo film crew who provokes a tribal war in the amazon, before being molested and devoured. The film attempted, quite successfully, to emulate a real documentary in certain segments and the premise is that a great deal of the footage is real. This led to rumors that the film did in fact contain the real on screen death of the actors involved. (And in fact there is a real life execution scene in the film, but through stock footage. None of the actors are in fact killed, or eaten, or any other such stuff.) Cannibal Holocaust is easily the most artistically well made film of the genre, and its reputation is well deserved. Ruggero Deodati even had to convice a court that the deaths were special effects, and spent some time in jail for the animal cruelty portrayed in the film. Don't see it if you can't stomach it.

The cannibal films are mostly trash, and I mean that in the most explicit sense. The editing is poor, the acting is terrible and the scripts are wafer thin. In addition the films are inherently racist and often come off as a remnant from earlier colonial times. The various exotic locations and tribes are always treated as savage, merciless and hellish and the death of a native is hardly worth a comment, while a scene depicting a white woman being molested can be lavishly detailed. In addition the supposed anthropolical aspects of the films are usually erroneous down to the very last detail. Prime examples are the portrayals of the amazonian Yanomamo as cannibals or the use of philipinos to portray Asaro mudmen from Papua - who also don't really eat people very often. (I have in fact met a couple of Yanomamo in real life, and they didn't try to eat me, or any other people.) But as it was with the mondo films, the value of these films is hardly in correct portrayal, but in shock and disgust.

In spite of this overdose of subconscious racism the films often have a anti-imperialist message. The filmmakers in Cannibal Holocaust clearly represent european interests with little respect for their film's subjects and end up being eviscerated and digested. Ursula Andress, of Dr. No fame plays a cynical capitalist searching for uranium in Papua has to witness the death of her brother (and eat his heart) and other horrors before escaping. While certainly not all the films have this premise it is certainly present in several of them. 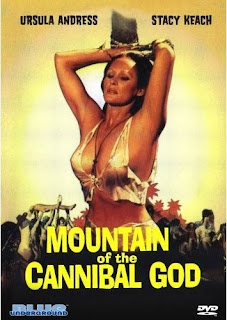 Another aspect that can hardly be ignored is the direct sexuality these films have. I have allready mentioned the former Playboy model Ursula Andress, who displays most of her body in Mountain of the Cannibal God - where she is oiled and rubbed by a pair of native women. She is not the only one. In Emanuelle and the last cannibals (1977) the beautiful Laura Gemser once again undresses in front of the camera as Emanuelle (not to be confused with the more famous Emmanuelle), the world's sluttiest reporter. (One of the least interesting Emanuelle Nera films, go watch Emanuelle in America instead. Now that's offensive cinema for you!) Also any cannibal film that doesn't contain a healthy helping of naked savage women is not really a cannibal film. The same goes for rape, and to some degree explicit images of castration. It's all very delightful. 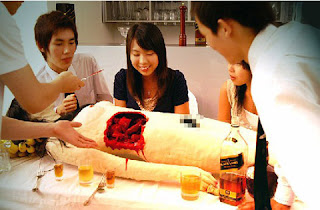 So now you know how to spend your weekend. Never mind clubbing or whatever, fire up Pirate bay, and get yourself some cannibal action! Once you've learned the joy of the dangers all natives present to white people trekking through a green hell, your world will never be the same again. I know I'm gonna get the last hufu out of the fridge and fire up Jungle Holocaust later today.
Posted by Thule at 12:34 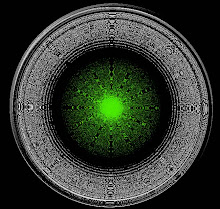 Thule
Historian and librarian by training, nerd and musician by lack of taste. My blog is highly eclectic ranging fra symbol analysis to blatant anarchism, nerdy chit chat and so forth. As a historian I am mostly concerned with myth complexes, symbolism and rituals in nationalist contexts.